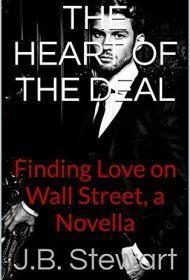 J.B. Stewart’s Heart of the Deal: Finding Love on Wall Street is a romantic novella with heart and smarts.

Kayla is an up-and-coming force in the financial world. As a junior analyst, however, she’s limited in what she can accomplish. While she has her heart set on becoming a portfolio manager at PrescottBlake Investments, her youth and inexperience relegate her to the edges of the conference room without a seat at the table.

Desperate to rise out of the poverty that has defined her early life, and to help her mother, Kayla breaks protocol and pitches a hedge fund idea during a staff meeting. Chief Investment Officer Samuel Prescott likes her plan and gives her a seat at the table. But he assigns the project to his son, James. James has one more chance to impress his father or he will face termination and humiliation.

When Kayla, with her “baby face” and “cupid’s bow lips,” is forced to work with “darkly handsome” James, sparks fly. Kayla is headstrong and opinionated, and James is desperately trying to save his job. What starts as hostility becomes something much more.

The Heart of the Deal has all the elements of a good romance, with the added bonus that the author herself is prominent on Wall Street. This gives the novella an authenticity and level of sophistication that is often missing in romance novels.

The story’s main issue is that there are too many side characters—James’ sister, and younger brother, for instance—that divert readers from the heart of the story and are never fully developed. Additionally, Stewart makes each chapter a scene—titled, for example, “Scene 6 [Monday 2 p.m.]”—rendering it somewhere between a novel and a script, which can be distracting.

The story would be better suited to a full-length novel that allows for more character development or a tightly focused screenplay. Despite this, The Heart of the Deal provides a quick and entertaining read.