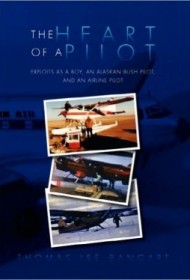 Thomas Lee Bangart, now in his 80s, grew up nearly dirt poor in Billings, Montana. After a ride in a barnstormer’s plane at age 5, he decided he wanted to be a pilot and, with determination displayed throughout his life, achieved his goal, becoming a bush pilot, then an Eastern Airlines pilot, and finally leaving that career to raise prize cattle. His memoir relates all of this, as well as tales of his earlier years working myriad other jobs.

In 1950, Bangart moved his family to Alaska, hauling a house trailer up the unpaved, hazardous Alcan highway. Existence on this frontier was truly a latter-day, mechanized pioneering. Anchorage barely had one paved street and generated its electricity from a wrecked ship. The temperature fell as low as 83 below, Kodiak bears could appear outside your camping tent, and bush piloting was a chancy, seat-of-the-pants, one-man business involving ferrying hunters, builders and others throughout Alaska, often in lousy weather.

While Bangart’s later work as an airline pilot also had its hair-raising moments, these sections are less engaging than the Alaskan passages. They have an “and then I did this” repetitiveness to them that, coupled with technical discussions, make them blend together. They are unlikely to greatly interest readers, except possibly those in the same fraternity.

Throughout the book, Bangart displays a relentlessly upbeat, grateful attitude, but his writing has an unwavering sameness to it. Not enough consideration has been given to editing and organizational structure–quotation marks are unnecessarily placed around “everyday phrases” and topics are discussed before being adequately explained (or never explained, such as the decision to move to Alaska).

The book is most likely to appeal to other pilots, with limited allure for general readers, who probably will find Bangart’s Alaskan adventures the most interesting portions of the story.