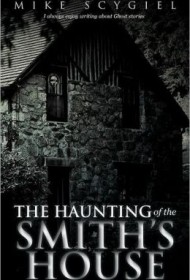 As the title notes, this book is about a haunting – one that, unfortunately, proves less suspenseful than the plot outline might indicate.

Although Frank Jones begins telling the story of a house haunting in his neighborhood, the narrative confusingly drifts in and out of an omniscient point of view. Jones starts by introducing readers to George Smith and his family, who moved to town because they fell in love with a Victorian home dating to the 1700s. The Smiths own a hardware store where another character, Harry Stoner, works. As it turns out, George’s wife is a terrific cook, and her pies beat out those of Stoner, the fair’s previous winner.

The day before Halloween, Stoner (later called “Harry warden” [sic] and “Barry Warden”) steals an axe from the store. The following night, he murders the entire Smith family with the axe because he’s angry about losing the pie contest. Twenty years later, a new family (whose members also have names that change) moves into the house and is haunted by Stoner’s ghost, although nothing very significant happens to them.

The misplaced apostrophe in the book’s title is but the first of an untold number of grammar, spelling, structure, point-of-view, time, setting and other errors in the writing mechanics. To make matters worse, the narration is redundant in the extreme. Consider this random paragraph: “All of a sudden, Steve and Deanna woke up from hearing there [sic] son Jeff screaming. What is going on [sic] said Steve as he got up to see what is going on with his son Jeff as he was screaming? [sic] He ran out of his bedroom to see what was going on with him as he ran out of the room. Jeff ran up to his dad and was very scared, as Steve saw him looking like he was very scared.”

As this excerpt demonstrates, the novel is extremely challenging to read. As a result of such technical issues and the story’s lackluster plot, it is unlikely to attract a wide audience.