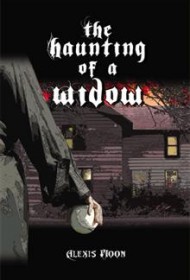 The Haunting of a Widow, written by a widow of five years, is a mystery from beginning to end, some of the puzzlement intended, the rest prompted by the author’s challenging writing style.

As the story begins, Martin and Michelle live on a farm outside of Milwaukee. Michelle plans to fly to Vancouver to help one of their daughters move to a new place. Martin is sad about his wife leaving and is especially loving the night before she departs. On the turbulent flight, Michelle sits by an elderly woman who later hugs her, whispers not to turn her back on gifts, puts $100 in her pocket and walks away. The next day, Michelle learns that Martin is dead. No cause is given.

The family meets with the spooky funeral home director. Apparently the casket has been dropped and is dented and dirty. During the odd service, a malodorous mist appears, then vanishes. Asian beetles swarm around the casket, then disappear. Feeling an evil presence in the room, people run outside because they can’t breathe. Several attendees see Martin in the back. As the story progresses, Michelle attempts to deal with the strange occurrences and the loss of her husband.

The horror elements in the story are unrelenting and offer none of the subtlety that makes the best horror stories compelling. Animals are killed. The walls bleed. Garbage is strewn. Before long, the strange happenings are no longer jarring, but simply tiresome. Michelle doesn’t behave the way a rational person would when confronted with evil. She has a Halloween party; she orders new furniture; she stays on the farm. Articles and prepositions are often missing from sentences; and the book features photos at the end, adding to the confusion: are they staged or real?; what do they mean?

As a result of these flaws, getting to the end of the book is a struggle, and readers may wish the writer had been more restrained in her approach.