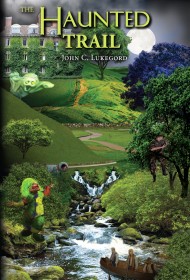 John C. Lukegord’s horror story, The Haunted Trail, presents in brief chapters a series of gruesome killings that take place on Halloween in or near the Dublin woods in the 1800s.

The novel begins with the murder of two young boys, events that are, for the most part, unrelated. Dylan is decapitated by the “crazed farmer O’Sullivan” for tampering with his scarecrow, and Billy is clubbed to death by his violent father, Scott McArthur. The only thing connecting these murders is setting and time.

The book continues in much the same fashion. Most of the chapters contain one or two loosely related murders and just enough character background to show why the victims are targets, and the perpetrators so blood thirsty. While this makes for a fast-paced read, it does not make for an absorbing one. For a horror novel to be successful, the characters in jeopardy must be ones readers care about. Here, the novelist goes through characters so quickly in his rush to present a variety of different ways to die (beheading, electrocuting, slicing, burning, stabbing, etc.) that readers have hardly any time to get to know the players.

Even the novel’s main character, Mick Patrician, is sparsely developed before he performs his own murders in an attempt to avenge his brothers who were also killed on this same Halloween. Because the characters are so lightly outlined, their dialogue, which should spring from their personalities, does little more than to add hyperbole.

To garner a readership, consequently, the author would need to work on developing his characters and on letting the plot flow from their complexities. As it stands, The Haunted Trail reads more like a blueprint for an online game than a novel with texture and density.