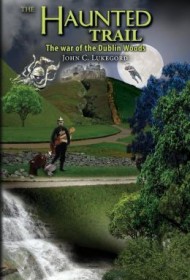 The Haunted Trail: The War of the Dublin Woods is the second installment in John C. Lukegord’s The Haunted Trail series. Rather than a standalone book, the story counts on readers having experienced the first book to fully understand the plot.

In previous episodes, it seems, psychopathic killers escaped from an insane asylum and have gone on a killing spree. The hero, Mick Patrican, is chasing some of them and being chased by others when he slips and falls, removing him from the action for most of the book. Everything takes place on Halloween night in and around Dublin, Ireland, in 1892.

For a single night and such a short book, the body count is extremely high (on the Dublin police force alone, dozens of officers die in the tale), as are the number of horror elements. Folks are killed with knives, guns, cannons, earthquakes, hurricane winds, lightning, guillotines, pendulum blades — and sometimes combinations of these. Readers can also expect a mummy, ghosts, two different colors of aliens, lunatics and magic plants.

Because of all of the dying and strange happenings, readers never get the chance to empathize with any of the characters. The protagonist survives a Sherlockian tumble down a waterfall with broken limbs and a punctured lung and crawls into a cave in the beginning. Then pandemonium ensues, and he isn’t seen again until near the end of the story. Although most of the hapless victims are introduced by name before being murdered, the deaths happen so fast that readers don’t really care about them as individuals. Additionally, the anachronisms in the story, including the language and some of the weapons and names, are somewhat distracting.

Nonetheless, there’s an audience for stories where blood almost literally drips off the pages, and those readers might enjoy this novella. As previously noted, it is recommended that they read the first installment to better understand why all of this nastiness is taking place.