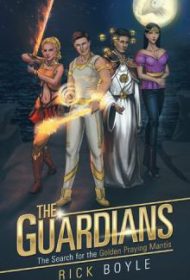 Rick Boyle’s fantasy novel for young readers follows three teenagers and their teacher as they search for a magical insect.

Seth is a star football player, and his younger brother, Sean, generally has his nose in a book. Nevertheless, they share a loving bond. Their lives change dramatically when Miss Tia, their science teacher, offers Sean an opportunity to enter a national entomology competition. At her suggestion, and joined by Seth, he decides to continue research her late father had begun on the mythical golden praying mantis, a magical being.

Meanwhile, Seth becomes interested in classmate Amber. As their relationship develops, she joins the quest for the mantis. When a field trip takes the protagonists to an ancient sacred site, they find the mantis, which turns out to be their only hope against a menacing beetle named Plague and an evil mystic who longs for insects to dominate the world.

A fantasy based on insects is an intriguing and unusual idea, but the story’s effectiveness is hampered by several flaws. The novel’s first half is concerned almost entirely with the brothers’ scholastic, athletic, romantic and family activities, none of which is compelling. When the adventure begins in earnest, it comes too late, despite some powerfully unnerving scenes.

The novel’s tone is also inconsistent. It appears positioned as a serious adventure story and to a lesser extent a family drama. It’s jarring, therefore, when Boyle uses silly names for some characters (e.g., Bitemeee and Mr. Bored) and makes a gang of bullies too clumsy and stupid to be taken seriously.

Boyle’s depictions of female characters also leave much to be desired. They are almost universally materialistic, manipulative and/or preoccupied with boys. Even Miss Tia dresses in a sexy outfit to trick a man into helping her.

In sum, despite the promising concept, The Guardians needs serious revision before it’s likely to gain significant audience appeal.