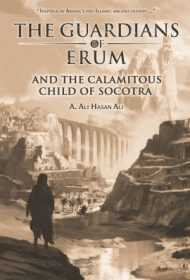 A Ali Hasan Ali’s debut novel is a unique dive into the fantasy genre, a work that features mystical creatures, magic, epic heroes and death-defying deeds, as well as history that draws directly from folklore, mythology and geography of the pre-Islamic Arabian world.

The Abu Dhabi-based author tells the tale of Fada, or Fad, a date farmer living in the Erum Province south of the Arabian Desert long before the arrival of Islam in the 7th century. Eight days after Fada and his wife welcome the arrival of their first son, Dileel, tragedy strikes.

Behas the saher, lord of the jinnic realm, arrives at Fada’s humble dwelling in the dead of night to kidnap the child. Behas comes armed with jinns – mystical, magical beings or genies –to abet his crime; the warlock is intent on killing the “calamitous child,” whom he says was born under the ill-fated Serpent-Neck star and holds the potential of global destruction.

After the plan is foiled, the story tracks Fada’s subsequent epic journey across the Arabian peninsula as he strives to save his only son and deals with a variety of sheikhs, sorcerers and spirits in the process.

Ali writes with fervor and folksiness, summoning the spirit of a storyteller around a campfire. The author provides readers important context with descriptions of the folklore, vocabulary and cultural traditions of the ancient Arabian world. This approach adds a degree of authenticity and realism that’s rare in a genre dominated by fanciful tales of magic, monsters and heroes.

The author’s work to reconcile the story with real history isn’t always graceful: it tends to dwell too long on asides that derail the action, especially in the first section.

But Ali eventually finds his pacing and offers a tale that hums with both imagination and carefully researched folklore. His immersion into an ancient world of magic and mystery is sure to satisfy not just fantasy fans—but anyone who loves a well-told tale.