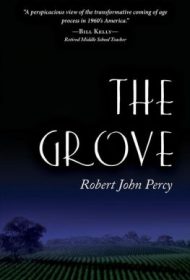 Robert John Percy’s The Grove is a middle grade coming-of-age novel that recalls the 1986 film Stand by Me, based on Stephen King’s novella, The Body.

Set in an early 1960’s California suburb near a large orange grove, the story concerns protagonist Chipper’s summer between sixth and seventh grade. New to the neighborhood and hiding his mother’s alcoholism, he befriends two boys, Doog and Craig. One night, they pretend to camp in Chipper’s backyard, but instead sneak away to a treehouse they built deep inside the orange grove.

They have a frightening experience when a dangerous man tries to enter the treehouse. Soon afterward, Chipper enlists the aid of Kristy (his crush) and Roger (an older local boy) to help catch this criminal who has been terrorizing their neighborhood.

The book captures this era well, including the grove’s looming demise due to real estate development. The children frequently worry about “getting in trouble” with their parents, which factors into the ending.

Writing problems occur occasionally throughout and include typos, punctuation errors, and an awkward narrative with shifting points of view that can be confusing. For example: “‘Doog told me he heard that from a bunch of kids at the field.’ He was referring to the Little League playing field where he and Chipper were on a team.”

Fans of Stand by Me will recognize derivative elements in The Grove. These include the general story and themes, and specifics, such as a planned phone call to authorities, one boy carrying a weapon, one child coming from a “bad” family, and one boy seeking redemption after committing a crime, even though he returned what was stolen.

More mature readers will find this issue and the writing flaws distracting. That said, the novel might be enjoyable for middle grade readers who are more likely to overlook such factors.