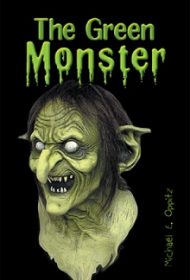 A reel push mower helps two young teens build confidence and self-worth while conquering a lawn in Gardner, Kansas, that they dub “The Green Monster” in this simply penned, tenderly wise book.

Michael E. Oppitz, a semi-retired horticulturalist and substitute teacher, has worked with youth over the years both in Kansas and Alaska. He observed many boys struggling with staying on task and making good choices and believed they needed an outlet to help develop respect for themselves and others.

Oppitz himself became enamored with the physical exertion and ultimate satisfaction found in lawn mowing using a reel mower and thought such a task might benefit troubled boys. In this story, a substitute teacher named Mr. O. provides that chance to Jorge, who lost his father to colon cancer, and to Tim, whose early gang involvement landed him in a correctional facility.

Both boys initially struggle with the challenging mower and proper mowing technique. But over the weeks, their haphazard efforts transform into quality work—and so does their attitude and sense of accomplishment. As Mr. O. tells Jorge, “Something small done right with courage and merit can turn into something big later on.”

This is not a novel with a strong, standard plot line. Rather, it’s constructed more as a paradigm to inspire those working with youth on how to better reach them. Descriptive elements throughout and some personification (“The driver’s side door loudly squeaks with resentment as it opens”) add visual color to the characters and setting.

The book requires strong editing to correct punctuation, misspellings and occasional word misuse. Additionally, the cover art depicting a gruesome-looking monster is bound to mislead readers into thinking this is a horror novel.