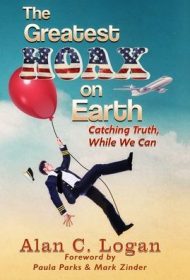 In his fascinating, true-crime expose, The Greatest Hoax on Earth, Alan C. Logan aims to debunk Frank W. Abagnale’s claim in his best-selling autobiography, Catch Me If You Can, that he’s “the world’s greatest con man.”

Abagnale, self-proclaimed master criminal with a heart of gold, has managed to parlay his Robin Hood-esque, yet rarely vetted, stories of a restless youth spent stealing from the rich while never victimizing everyday people into a million-dollar cottage industry of keynote speakers’ fees and crime-prevention seminars. Logan sets out to prove that these stories are lies.

With the help of real-life victims Paula Parks, whom Abagnale stalked until he weaseled his way into her parents’ home and bank accounts, and Abagnale’s former agent, Mark Zinder, the book directly challenges Abagnale’s well-worn narrative, exposing his most outrageous claims as not only untruthful, but also implausible.

For example, Logan reports that in the ‘70s, a local journalist easily debunked Abagnale’s oft-repeated claim that he pretended his way into a job as a sociology professor at Brigham Young University—which Abagnale recounted to Johnny Carson on The Tonight Show— by simply contacting the school. “Like many, the sociology department at BYU was exasperated,” Logan writes. School officials adamantly refuted the notion he’d ever been employed there.

Through witness interviews, court documents, timeline comparisons, police reports, etc., Logan convincingly paints Abagnale as a sloppy, small-time crook whose most successful con has been convincing the rich and powerful that he’s actually a “great imposter.”

A must-read for Catch Me If You Can devotees, Logan’s book also has plenty to offer readers unfamiliar with the story, masterfully weaving his research into an intriguing, entertaining, cohesive story that’s difficult to put down. At once a true-crime story, an exhaustively researched work of investigative journalism, and a plea to aim higher when choosing our heroes, Logan manages to accomplish something with The Greatest Hoax on Earth that Abagnale can’t lay claim to: He succeeds on every level.