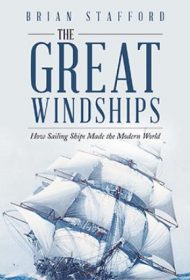 A ringing 21-gun salute to the heyday of sailing ships, Brian Stafford’s narrative history, The Great Windships: How Sailing Ships Made the Modern World, displays an old-fashioned relish for the daring of nautical adventurers and innovators of yore.

The book begins by carefully defining relevant terminology, explaining how a sailing ship is built, with its rigging, sails and masts, and how it’s operated, in concert with known ocean currents and wind patterns. Striking a contemporary ecological note, Stafford emphasizes that wind is the ultimate renewable (if unpredictable) resource.

Moving onto history, he gives imperial China credit for launching the “first great voyages of exploration” with sailing ships, in the 15th century. However, it was Western Europe, beginning with Portugal, that truly tapped into sail’s potential. In this section, readers will encounter familiar classroom names—Columbus, Magellan, Sir Francis Drake— but discussed with an added focus on the nautical innovations and knowledge that lay behind their achievements. One key resource, he notes, consisted of the “rutters,” or roteiros: detailed navigational records initially compiled by Portuguese navigators but later stolen by other European powers.

As the narrative moves closer to the present, skillfully covering first America’s and then Britain’s domination of 19th century commercial shipping, the names and incidents become less familiar, and perhaps for many readers, more revelatory, as an origin story for contemporary globalization. Stafford covers, with palpable enthusiasm and in granular detail, the elegant design and still-impressive feats of speed displayed by the era’s sleek “clippers” and “windjammers.” To his credit, he also acknowledges the era’s darker side, with opium and laborers—both enslaved and indentured—frequent cargo.

On non-nautical points, Stafford sometimes notably errs, as by conflating the Holy Catholic Church and Holy Roman Empire, and also falls at times into repetition, making a number of identical points throughout.

Nonetheless, for avid sailors and learned nautical history buffs, this wide-ranging book will be a useful and a deeply pleasurable source of reference.