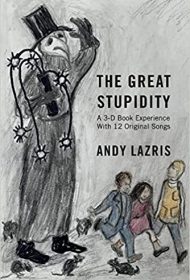 Andy Lazris’s The Great Stupidity is a satire set during the plague, lampooning present-day responses to COVID.

A village blacksmith referred to only as “Smith” has miraculously survived the plague, attributing his luck to religion and science—particularly the advice of The Great Frenchie, a supposedly infallible academic who advises everyone to protect themselves by waving bad air away and building six-foot walls around their villages. Now, in hopes of ending the plague outright, Smith is tasked with restoring the village’s religious relic, half of Saint Ambrose’s toenail, by retrieving the other half.

Smith is soon sidetracked, however, when, while seeking an audience with the Pope, he meets Cassandra, a member of the pontiff’s harem. She drops a bombshell: The Great Frenchie’s supposed science is hogwash.

Smith is still reeling from this news when the two of them stumble across a plot to murder local Jews for supposedly causing the plague; together they help Isaac — a crypto-Jew and Cassandra’s new love interest — fake a genocide to satisfy the zealots. Isaac, with smitten Cassandra in tow, sets out to help Smith restore the toenail. Together, they encounter unhinged flagellants, doomsday profiteers, and ultimately The Great Frenchie himself.

Laced with silly, irreverent humor, the book is a mix of Monty Python and Mel Brooks, with comically anachronistic dialogue (Frenchie tells our heroes he’s being interviewed by Monks and Nuns Digest). The characters are instantly relatable and likeable, and the funniest bits are squarely aimed at dogma and bigotry, relevant to either side of today’s political divide. That said, those who don’t agree with the author—who, in a lengthy preface, lambastes the “faux science” surrounding what he sees as modern medicine’s heavy-handed response to COVID—may not find the rest of the humor as funny as those who do.

Each chapter ends with song lyrics recapping events. (Lazris directs readers to recordings of them online.) These are only mildly humorous and slow the story’s pace.

For those open to Lazris’s viewpoint, The Great Stupidity is great fun, providing an exaggerated mirror of the last two, very un-fun years.