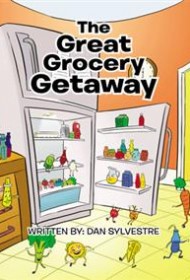 Dan Sylvestre’s new early reader picture book follows the adventures of a group of fruits and condiments as they escape from a refrigerator and set off for the Florida Keys.

Olivia, an orange, and Alan, an apple, overhear their fellow fridge denizens Bbq Betty, Pickle Pete, Tartar Teddy and Mr. Mustard plotting to escape their “food’s limbo” of waiting to be “emptied and thrown away.” The two fruits join the group, and that night, when Jimbob, who owns the fridge, comes down for his midnight snack, the runaways make their escape.

After Mr. Mustard and Pickle Pete defeat Rex, Jimbob’s Chihuahua, the foodstuffs make their way outside, only to be menaced by bats. Fortunately, Jenny, a pink bunny, and Dan, a blue turtle, come to the rescue and guide them to the bus stop. With the help of “a large woman with a very large purse,” the escapees sneak aboard the bus and at last reach Florida and freedom.

The story ends happily for all, though Alan loses Betty, the object of his affection, to a motorcycle-riding steak named Sammy. Still, even Alan cheers up when Pete reminds him “there’s plenty more fish in the sea.”

The Great Grocery Getaway’s kooky storyline and fast-paced, wisecracking narration should appeal to young readers, although they should be of an age to tolerate large blocks of text broken up by relatively few pictures. The book is likely to be more successful when read aloud than read silently, as children of the age most likely to enjoy its silliness may need some help with concepts such as ninja stars and GPS.

Marvin Alonso’s lively, cartoonish illustrations complement the story well, but photographs interspersed with the drawings lend a jarring and unpolished feel to the book. The writing also includes the occasional clunky phrase (e.g., “[s]o many different options of where we could end up”).

Despite these weaknesses, The Great Grocery Getaway should entertain its target audience.