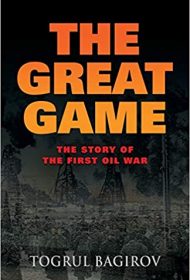 Set in Russian-controlled Baku, Azerbaijan, Togrul Bagirov’s The Great Game: Story of the First Oil War transports readers to the late 19th and early 20th centuries, during the ruthless fight for control of oil as the Russian Revolution gathers momentum in the background.

In 1876, Emanuel Nobel travels with his father Ludvig from Stockholm to Baku, following his father’s vision of drilling oil. Ludvig and his brother Robert establish BraNobel, an oil production company, and through Ludvig’s ingeniousness, the company achieves remarkable success. Among other inventions, he designs the world’s first oil tanker.

As Ludvig’s health starts to deteriorate, Emanuel steps into his father’s shoes. In addition to navigating the devious schemes of the other oil barons (the Rothschilds and Rockefellers among others), Emanuel must deal with growing threats of a Russian Revolution as Communist leaders Lenin, Stalin and Trotsky fight for the abolition of capitalism and heighten violence against the Russian elite.

Carefully researched, the novel closely follows the political and industrial landscape of Baku and the events taking place on Russian territory at that time. The narrative explores the culture of the Baku people, the devastating poverty among the working class, the upheaval surrounding the revolution, and the business rivalries that characterized the oil industry.

Although the story is set in turbulent times, Bagirov maintains his focus by concentrating on the lives of Emanuel and his father Ludvig. Both are admirable characters, defying the oppressive working standards of the era by setting fair compensation and establishing better conditions for their workers. Emanuel’s ill-fated attraction to his friend’s daughter, Leyla, is realistically drawn and compelling.

With a looming revolution, hired spies that keep Emanuel vigilant and continued rivalry between oil barons, not to mention exciting ground-breaking inventions, the plot maintains its suspense throughout.

In all, The Great Game: Story of the First Oil War is a satisfying work that will please fans of historical novels set in this era.