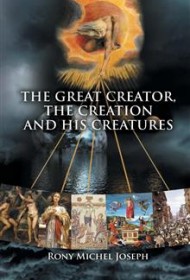 In the western spiritual tradition, poetry has been a doorway to the sacred ever since the Psalms were first written thousands of years ago. It is a tradition that has been embraced over the centuries by such diverse poets as Rumi, William Wordsworth, Gerard Manly Hopkins and Mary Oliver. In The Great Creator, the Creation and his Creatures, Haiti native and grandfather Rony Michel Joseph offers readers a series of poems that looks to explore, explain and illuminate our human relationship with the divine.

Inspired by the Bible as well as the teachings of Sathya Sai Baba, an Indian guru, Joseph’s work uses simple, sing-song-like rhymes to comment on a wide range of topics, religious and otherwise, including creation, money, life, taxes, occupational safety, prayer and even San Francisco. Riffing off scripture, for instance the opening chapter of Genesis, or a Wikipedia article on work, death and sickness, Joseph finds revelations everywhere and freestyles with such lines as, “Without the soul the body has no existence/The soul gives to the body its consistence/They both have coexistence/The soul has the body for residence.”

The author’s deep devotion to God and reverence for life is illuminating. Yet, the book feels disjointed with its disparate topics, and the author often sacrifices clarity for the sake of rhyme, as in: “Crazy, because he had considered poverty as his fairer bride/Of whom he was always pride” or “Work, sickness, death all imply time/ And all three must be considered as prime…”

Further, there are technical problems with the book. Text repeats verbatim on pages 36 and 38, and the overuse of italics makes it difficult for readers to know where an excerpt from another work ends and Joseph’s poetry begins. There are also many issues with improper punctuation.

In sum, these private devotions need more editorial work before they can reach a wide audience.