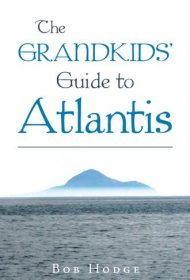 Cousins Chris, Demi and Alex are struggling with the vagaries of adolescence. Chris, with his half-Aboriginal heritage, doesn’t fit in at his prep school. Demi’s life seems charmed from the outside, but she self-harms to blunt the pain of her parents’ troubled marriage. Alex embraces his nerdiness but questions his sexuality.

Mysterious packages from their grandfather bring the three together. Though supposedly dead, Granddad has given each of the teens a well-appointed laptop that allows them to communicate with each other and with an avatar of him. The computers also feature interactive avatars of Greek gods and goddesses and virtual reality access to historical locations and figures.

Although he was a successful I.T. professional, Granddad’s passion was his research into the history and location of Atlantis. Humiliated years ago by an academic rival, Granddad never gave up his belief that the quasi-mythical land existed. Through his gifts, he convinces the three grandchildren to continue his search.

Chris, Demi and Alex’s research brings them closer to each other, inspires them to contemplate their heritage and helps them solve their real-world problems.

The novel as a whole, however, feels somewhat inert. Although the teens eventually travel in search of Atlantis, they spend most of the novel behind computer screens. Readers will likely wish for a sprinkling of magic to enable real, rather than VR-enabled time travel in order to enliven the narrative. Barring that, getting the characters on the move sooner would greatly help the pacing.

Overall, The Grandkids’ Guide to Atlantis has a strong conceptual foundation. Some structural revision is required, however, for the novel to find an enthusiastic audience among teens.