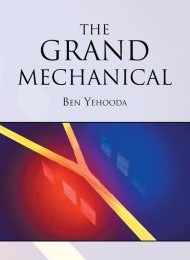 Ever since James Maxwell developed four equations demonstrating that electricity and magnetism were different manifestations of the same phenomenon, physicists have been trying to construct a unified theory to explain nature’s basic forces. Their attempts to develop an elegant solution to the understanding of the workings of the universe are so pervasive that even lay people have become familiar with terms like “Unified Field Theory,” “Grand Unified Theory” and the “Theory of Everything.”

With The Grand Mechanical, Ben Yehooda presents another theory to explain the fundamentals of the universe. In it, he posits the collision of two space-time continuums. This collision, he states, explains “the shape and structure of our universe as well as the expansion of our universe.” He goes on to describe gravity, electricity, dark matter, and so on, in relation to the properties of the continuums.

Yehooda’s book is short, only 39 pages, and although the brevity of his work is not uncommon for physics papers presented for scientific communities, it is unusual for a book aimed at lay readers. In his preface, Yehooda assures readers that his book will provide them with the building blocks to make sense of life. Readers however, are presented with so little basic information and connective material for each of Yehooda’s intuitive leaps that they are left with only questions. (How, for instance can there be two space-time continuums co-existing “in the same space”?)

Many of the chapters in The Grand Mechanical are only two pages long and cover material that a physics professor would be hard-put to explain in a hundred pages. Yehooda, like many abstract thinkers, attributes a basic knowledge to lay readers that they simply don’t have. In order to make his theories accessible to general readers, consequently, Yehooda would need to expand his work, adding detailed explanations referential to a basic scientific vocabulary.