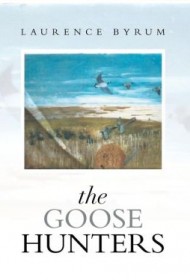 On the grasslands of South Dakota, early homesteaders had to be hardy and resourceful. Families like that of Laurence Byrum, who created this collection of stories, grew much of their own food and hunted for whatever meat was available, mostly birds: ducks, pheasant, and large, stately Canadian geese. Here, he offers stories from a variety of hunters, resulting in a shared memoir, of sorts.

Showing the passion typical in these stories, Laurence’s son, Brad, writes: “I suppose it may be impossible for anyone but a real goose hunter to imagine the feelings of anxiety and excitement that fill these moments. The adrenaline is flowing and you start to shake just a little as a result of that and the cold. And you love it.”

The hunts recounted here take place in the autumn when snow is already falling and the birds are migrating south. Byrum hunts alone and with the men in his family, young and old. The elusive nature of the birds adds to the anticipation, and sometimes the disappointment, of the hunt: One hunter describes trudging home in the deep snow, empty-handed, all the while composing an amusing but plausible story to justify his failure.

The men’s admiration for their intended prey is a notable theme of the collection, and the fact that various hunters have contributed adds emotional layering to this collection, though it also presents a problem as it can be difficult to discern who is writing at any given time. Because this is a mélange of recollections by different people, the writing quality varies: at times skillful, at times simple and ungrammatical. Such deficits, while making for occasional puzzlement, distract little from enthusiastic narratives that speak of a strongly religious, close-knit community overcoming the harsh conditions of the Great Plains.

Patriarch Byrum honors his family’s hunting exploits in this paean to their glory days; his book may garner friendly interest in his local region and among bird hunters elsewhere.