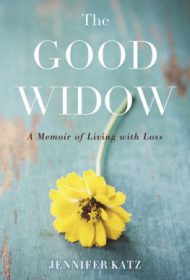 In her candid, courageous memoir, The Good Widow: A Memoir of Living with Loss, Jennifer Katz discusses the months following her husband’s unexpected death, recounting her grief and path to renewing hope for the future.

“May be having a heart attack. Called 911. Ambulance on the way” was the last communication Katz received from Tristram (Tris), her husband of 18 years. Tris, 12 years Katz’s senior, died in the hospital before the author arrived. At age 45, Katz was forced to adapt to widowhood: “the new reality of a life I didn’t choose – and definitely didn’t want.”

Following the initial sensation of numbness, Katz faced physical, emotional, and spiritual emptiness. She wondered, “Who am I now?” Six months after Tris’s death, her grief intensified. During this time, Katz wrote Tris a letter revealing: “I’m an emotional amputee. You’re now a phantom limb.”

Slowly, Katz began to evolve. She read books, visited mediums, and attended grief groups as well as a conference aptly named Camp Widow. The author found new ways to connect with her grief and to friends and other widows for support. She wrote letters and birthday cards to Tris. Eventually, she began seeking romantic partners, which evoked both shame and hope. She couches her sometimes-frustrating experiences with humor, embracing lessons learned.

An academic clinical psychologist, Katz presents her thoughts in the form of essays, letters and carefully crafted questions allowing readers to consider their own grief. She relates her experience with raw vulnerability, encouraging readers to do likewise. Her lyrical prose is uniquely captivating, drawing readers in with ease. “[H]e was a body, then just a shell,” she writes of her husband’s “non-existence.” “And so was I.”

The Scottish poet, Thomas Campbell said, “To live in the hearts we leave behind is not to die.” Katz’s widowhood embodies this concept. Her memoir sharing the universal human experience of grief will resonate with all readers, even those who have yet to experience such devastating loss.