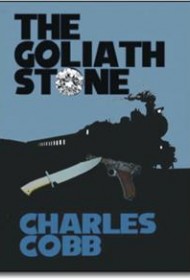 A Canadian military pilot is sent on a complicated mission to Romania during World War I in The Goliath Stone. This espionage novel is written by Charles Cobb, an actor who has appeared in film and television, including Superman movies, In Cold Blood and Macgyver, according to his author bio.

The story sees Lieutenant Miles Armstrong and his sidekick, mechanic William O’Reilly, battling a variety of villains on a complicated mission to liberate a Romanian queen and recover valuable jewels, among other adventures.

The narrative follows Armstrong every step of the way, a decision that might work better if he were characterized a bit more originally. He’s treated as a WWI-era James Bond, spending as much time bedding sexy ladies and smoking cigarettes as he does battling villains. Occasional comic relief is provided by O’Reilly, portrayed here in extremely broad Irish stereotype.

Near its midpoint, The Goliath Stone starts picking up energy with some decently rendered spy thriller scenes and general derring-do. Unfortunately, it’s an often-slow 150 pages to get there: Armstrong isn’t interesting enough to be especially entertaining when he’s not in the thick of battle.

Most of the dialogue echoes 1930s B-movie-type conversation, and this is the kind of book where one character holds a gun on an ally for no practical reason, only for dramatic effect. If the story were tighter, it could play as pulp, but the requisite momentum isn’t there, especially in the first third. There are grammar problems as well, particularly missing commas throughout.

The Goliath Stone has its finer moments. Some action scenes engage well, and the author employs the occasional smart turn of phrase. But when all is said and done, it’s not effective enough to keep suspense fans involved throughout.