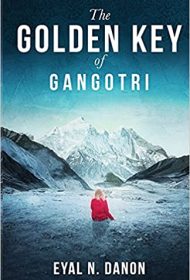 Eyal N. Danon’s engrossing novel tells the story of a daughter searching for her father and finding herself along the way.

Eight years earlier, Harley Green’s father vanished in the Himalayas. Now a 20-year-old student at Columbia University, Harley finds herself more distracted than ever by his mysterious disappearance and embarks on a trek to the headwaters of the Ganges River, known for its sacredness and her father’s last-known whereabouts.

Initially, Harley aims to learn more about her father’s fate. The trip evolves, however, into a journey of self-discovery as she ponders her future and questions her goal of becoming an architect.

Harley plans to go alone to Gangotri, but she meets Rajou, a young man who offers to accompany her. Rajou, too, is uncertain about his future, and their friendship quickly develops into something deeper. Harsh conditions, fear of what she may unearth about her father, and the unexpected appearance of one of her college professors are all part of Harley’s adventure.

Initially, readers will find the latter contrived: Why is the professor in the exact remote village at the same time Harley and Rajou arrive? Ultimately, however, all the components are crucial to the narrative, and when the professor reveals he was her father’s best friend, this surprise is the first of many as Harley learns more about her parents, their relationship to the professor and his role in her father’s disappearance.

The novel is rich with vivid descriptions (“The canyon walls around her rose to infinity…the giant rock walls closing in on them and the complete quiet made her think of the silence at the very bottom of the ocean, where no person had ever walked before”). Harley is a strong character, and the dialogue is realistic, with Harley and Rajou sharing both personal and intriguing philosophical thoughts.

As the story evolves, Harley finds more answers than she might have anticipated, and readers will find themselves immersed in this fast-paced, meaningful story.