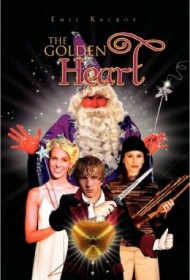 Young readers (ages 8-11) with a love of action over character development will have fun with this tale of fire-breathing dragons and magic spells. Emil Kackos’s The Golden Heart pits a small gang of multi-specie tweens against an evil wizard determined to take over the world. Good-hearted and fearless, the new friends rise to the challenge.

The land of Rondolar is under attack. A strange disease is killing crops, and fire-breathing dragons are descending on the kingdom nightly, leaving a trail of destruction in their fiery wake. Desperate, the king sends emissaries into every corner of the known world with a plea for help. The gregarious Beirs, with their dark fur and green outfits, and the Bunis, with their long ears and furry-tails, eagerly join the Humans in a battle for survival.

Meanwhile, an ancient, sage-like being from an impenetrable swamp known as the Misty Lands, appears. Named Sabrina, she informs the king and assembled masses that they must send a powerful witch to vanquish the black magic that’s been set loose in the world. Sabina places her gifted, great-great-granddaughter Rhiannon in charge of the mission and selects the supporting cast. Each member of the group is granted a single magical power to help them complete their task.

The group sets off with their instructions in hand: they must find the wizard Maelor and destroy the source of his malevolent power, The Golden Heart, before dragons and black magic savage the world they love.

Kackos’s tale is fairly well plotted, if uneven in style and pace. While filled with gripping battles and magical feats of daring, the book suffers from the occasional twitch of odd formatting (words are highlighted in bold for no apparent reason) and incorrect grammar that tend to distract the reader from the adventure at hand.