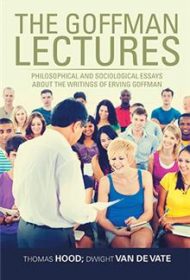 The admiration these two authors felt for the influential sociologist Erving Goffman resulted in a series of interdisciplinary lectures on Goffman’s work the two men delivered at the University of Tennessee, Knoxville, in the 1970s. This valuable book delivers these lectures in print form.

In the greater scheme, it doesn’t matter much that it’s taken 40-plus years to bring out this book. Goffman, a towering figure in the social sciences who pioneered the “symbolic interactionism” theory of sociology associated with the University of Chicago, is unlikely to fade from the literature or curriculum. Meanwhile, the different angles from which the authors assess his contributions—Thomas Hood is a himself sociologist, while Dwight Van de Vate is a philosopher—train a bright, original light on the Goffman canon (he died in 1982).

Heavy going at times in terms of academic language, The Goffman Lectures is essential reading for professional social scientists. But Van de Vate’s pieces, in particular, clear enough cultural and linguistic barriers to engage curious general readers. Both writers relate Goffman’s work to everyone from Shakespeare to Sartre to Eliza Doolittle to Dustin Hoffman’s savant character in Rain Man.

In simplest terms, Goffman believed that “the self” is socially constructed, an adaptable, chameleonic actor that is “real” only insofar as it embodies the social order. He expanded this basic view in seminal works like The Presentation of Self in Everyday Life (1956), Stigma (1963) and, most important for these authors, Frame Analysis (1974), to which they devote half of these pages.

The authors are not entirely uncritical. Hood sees “an inherent circularity” in some of Goffman’s arguments and wonders about the private Goffman, this “brilliant writer . . . (a) moral man provoked, irritated, annoyed into coming out of himself.”

In the end, Van de Vate nails the depth of Goffman’s contribution. For he finds in the sociologist’s work a profound asking of the burning question that haunts all of humankind. “What really exists?”