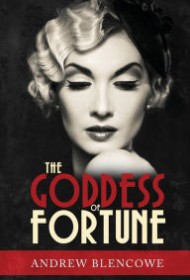 Alternate history—the imagining of what might have happened had history developed differently—is a fascinating genre. It allows an author to run amok along the landscape of history, remaking it according to his or her will.

This, Andrew Blencowe largely accomplishes in his new novel, set simultaneously in all corners of the globe. Readers can almost feel the author’s delight in leap-frogging from country to country, society to society, as he weaves a tale of a world in which the allies lost WWII, and in which the destruction of a major portion of the world’s economy dictated the postwar terms. The central character is Louise Koch, a voluptuous German spy who, much like Forrest Gump, seems to appear everywhere and with many historical players on both sides of the war.

The book is most successful when Blencowe is describing his supporting cast—the many famous military and political players of the WWII era who populate The Goddess of Fortune. Franklin Roosevelt is portrayed as a control-freak; Winston Churchill as a bombastic blowhard; and Brains-Trusters Rexford Guy Tugwell and Harry Hopkins are amalgams of modern day political handlers. Historians will nitpick each of these characterizations; for example, Henry Morgenthau, exceedingly dull and aristocratic in real life, has here been reinvented as a dashing hero-type. Additionally, the central character of Louise Koch is never fully formed, seeming more of a cartoon—an Agent Carter type of character — than real. Readers should also be warned that portions of the book are so overtly sexual, they could make even a mature audience blush.

Alternative fiction fans might better appreciate Philip K. Dick’s superb The Man in the High Castle, which also imagines a world post-Axis victory. The Goddess of Fortune is less effective, more of a wild romp than a tightly woven tale. But within that romp, Blencowe introduces readers to some great characters. Indeed—wait until you read about what happens to poor Hermann Goering.