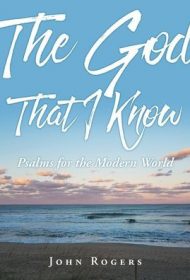 John Rogers’s The God that I Know: Psalms for the Modern World is a collection of 75 psalms exploring the author’s relationship with God, who he sees as loving and forgiving.

Rogers is a graceful writer, with a maturity, clarity, and warmth that seems to come from his Christian humility and gratitude. Many of his psalms focus on the wisdom and knowingness of his god, as in “Psalm 12”: “…the Lord, who sees inside my heart,/ knows my sorrow at failing Him./…/ He sets me back upon the path that leads me to Him.” And “Psalm 23:” “He will gather His children to Him, each at their appointed time./ Those who have struggled and suffered for His sake will receive their reward./ The Lord, who sees all and whose mercy is without measure does not forget.”

Rogers’ psalms begin with his narrator seeking guidance or forgiveness, and end in praise and wonder. The collection has a calmness to it, not in small part because of the long lines (admittedly, some can be a bit too long), often similar-length stanzas, and a stately rhythm that often uses repetition to ease readers through the poem.

There are several images throughout the book, with quotes, that seem unnecessary: Multiple photographs of sunsets or sunrises aren’t as engaging as the actual poems by Rogers. And the ideas and forms of the pieces here are not particularly original.

But that isn’t the goal. This collection should satisfy anyone seeking to honor a wise Christian god and who appreciates the ways an individual sustains a relationship through prayer.