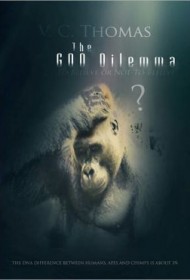 Born in India, engineer V.C. Thomas struggled with religion: “I used to believe in…God, and Christianity until fifty years ago,” writes the author, “since I was brainwashed into it by parents and family. This is how all religion believers get started.” After his retirement and reading Carl Sagan’s accounts of the universe, he set off on an intellectual journey to understand the world around him and to expose what he sees as the hypocrisy of religious belief.

There are two types of American Christians,” he writes. “One type known as the ‘Christian Right’ believes in bombing and killing people, and the other type does nothing to stop it or speak out against it.”

As evidenced by that statement, Thomas has strong opinions, and he lobbies considerable criticism against Jewish and Christian Zionists and offers controversial opinions about such topics as American Christianity; the Israeli/Palestinian conflicts; and America’s involvement in the wars in Afghanistan and former Yugoslavia. Concerning the Balkans, he writes: “So why were Serbs singled out for bombing? Four months of continuous and intense bombing of Orthodox Christian Serbia was carried out to appease the Muslim world and prove U.S. religious neutrality and to get the Muslim world to accept the European colonization and imperialism in Palestine.” While such statements, and others like these, seem to show religious bias, he nonetheless condemns atrocities against Jews and other groups throughout history.

Thomas’s struggle with the shortcomings of religion spills on to the page. The book is choppy, emotionally heated and rambles from topic to topic. Moreover, many will cry foul of the author’s accusations against different religious groups. Another area of concern: The author quotes long passages from a number of bestselling, mainstream authors. The length of many of these are in excess of what would generally be considered fair use.

Overall, the book requires revision for focus and tone before it can find an appreciative audience.