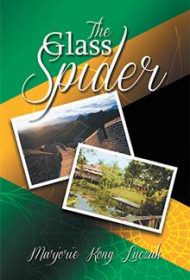 When the father of a 14-year-old Chinese girl arranges her marriage, it sets off a series of events in The Glass Spider that will affect the family far into the future.

Ah-Lan aspires to finish high school and earn a scholarship to study abroad, then return to help improve China. But it’s 1946; tradition dictates that females marry someone of the family’s choosing, particularly when he comes with a dowry: in this case, enough money to unite the family with her father, Joseph, who runs a shop in Jamaica. Lan is devastated by the news, but her mother and grandmother insist it’s not her choice.

Meanwhile, in Jamaica, Trevor Wong, the son of a much-disliked businessman, is also miserable. For reasons that are unclear, he’s an outcast in his family, but as the oldest, tradition decides his fate. A recent private school graduate, Trevor also dreams of furthering his education, but his father insists on marriage. He does, however, give Trevor the option of returning to China, where he was left with a foster mother for several years as a toddler, and picking his own bride.

So, in the Chinese village of Bong On, Lan and Trevor meet and ultimately decide their own future. About two-thirds of the way through the book, a second story starts, about Lan and Trevor’s oldest daughter, Margaret, who raises her family with an abusive, alcoholic husband.

This ambitious novel spans generations with detailed information about Chinese and Jamaican history and culture. The first part is more enjoyable, featuring an interesting plot and complex characters readers can empathize with. The second part feels more like a recitation of family facts than a narrative and is confusing chronologically. There are numerous errors throughout – missing words, redundancies and improper grammar – as well as random boldfacing and capitalization.

Overall, the book reads more like a memoir than novel and is likely to be enjoyed primarily by readers interested in Chinese culture and history.