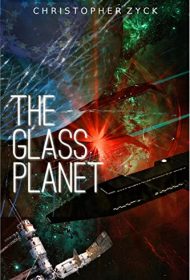 The story focuses heavily on the economic philosophy of humankind’s future society, which is to help facilitate “the ‘wellbeing’ of the human condition.” It begins with two people, a man and a woman, waking in a cave located in what looks like the jungles of the Amazon. The characters—who eventually realize they’re named Catherine and Jurgen —make it back to civilization only to discover a wildly technologically advanced world that has outlawed greed-fascism and has begun conquering the stars. But as the story evolves, readers learn that the seeming utopia isn’t as idyllic as it seems.

The sheer vastness of the story’s scope is noteworthy, comparable to Vernor Vinge’s shelf-bending, mind-blowing Zones of Thought novels (A Fire Upon the Deep, et. al.). The depth of world-building and scientific speculation is also a strength (the terraforming of Earth via revolutionary filtration and irrigation advances, for example).

The drawback of this release, however, is a lack of careful editing. Numerous repetitive sequences are scattered throughout the novel. Indeed, the “well-being” of the human condition is referenced more than 100 times, and there are several scenes that repeatedly examine economics and its role in supporting colonization of the stars.

In one passage, the author writes: “In the economic theory of the human will, wealth is defined to replenish the basic ‘wellbeing’ of the hundreds of millions living below the poverty line, to lift above deprivation of basic survival needs including health care, education, and employment.” This type of prose and its repetition negatively impacts narrative momentum and greatly detracts from the novel’s strengths as well as from the transcendent journeys of self-discovery of the two main characters.

Ultimately, this is a visionary and deeply speculative science fiction epic laid low by its editing issues.