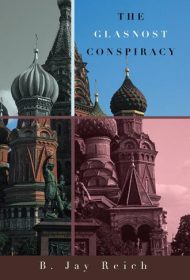 Recalling the plots of John LeCarré’s novels, B. Jay Reich’s espionage tale The Glasnost Conspiracy is full of unexpected twists and turns and a constant sense of “what’s happening now?”

The story, set in the 1980’s, is basically a mano-a-mano struggle between Arnie Rosen, a CIA analyst with a Special Forces background, and Charles Van Damme, the callous head of the CIA European Division, who will stop at nothing to achieve his ends.

When Rosen’s wife and children are slaughtered by Van Damme’s men, out to seize the file Rosen has built proving Van Damme’s collaboration with the Russians, Rosen swears to destroy Van Damme’s reputation and then kill him with his own hands. Van Damme wants to kill Rosen, as well, but soon realizes that won’t be easy. The chase that follows takes readers from Washington D.C. to Key West, Berlin and New York City, with guns blasting and bodies falling everywhere.

Rosen and Otto Gruhaber—a milquetoast computer genius duped by Van Damme and critical to helping Rosen expose his nemesis—eventually confront Van Damme in the Senate Hearing Room in Washington before the final plot twist is revealed.

Pages filled with graphic violence, dialogue with accents and dialect, and lavish descriptions of cities and buildings like Berlin’s Spandau Citadel Arsenal (“red, luminous brick; dozens of detailed statues of warriors and maidens protruding like the quills of a huge, red porcupine”) make for exceptionally realistic reading, a key strength of the story.

Unfortunately, typos and extraneous detail often prove distracting. For example, when Rosen is rescued from assassins in the Citadel, the author stalls the action to describe one attacker’s history of brutality in the Berlin police department, fantasy of himself as invincible, racist superman mentality, and his father’s Nazism—all of which seem unnecessary for such a minor character.

Still, the book offers rich settings that armchair travelers may enjoy. Espionage fans will also find some rewards in the twisting tale.