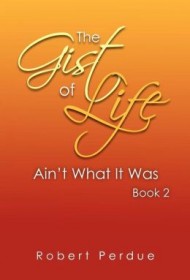 Filled with rants, homilies, fanciful ruminations and touching tributes, The Gist of Life: Ain’t What is Was, Book 2 is a smart, heartfelt, and sometimes persuasive collection of rhyming pieces that muse about life, often touching on topics of interest to those reaching the end of their days. Overall, the work feels more like pointed editorial pieces rather than literary poetry, each facilitated with AA/BB or AB/AB rhymes.

In “Modern Coffee Pots,” for example, author Robert Perdue writes: “Folks who relish a tasty brew/today are a measly few…” It’s a witty reflection on the discrepancy between cachet and actual quality but lacks detail and illustration. If Perdue were to describe how really rich, delectable coffee tastes, to elaborate on the distinctions between an expensive Keurig and a $20 Walmart percolator, for instance, he might break new ground.

Generally, urgency is a strength for writers, if used in the right way. In his passion to speak out on topics such as religion, patriotism, decency, justice, and equality, Perdue lays out his arguments with clarity, immediacy and no small amount of wit, but omits the components (metaphor, illustration, anecdote) that poetry commonly needs to be memorable and implacable — to touch readers on a poignant level, rather than to just indoctrinate them.

In “Lawyers,” he bemoans: “Lawyers don’t know which way to go/ ‘till somebody gives ‘em a clue./ They loll around where shysters abound/ and revel in the mischief they do.” Imagine how much more effective this poem could have been if Perdue had created an actual case, enriched with resonant description, instead of making it a straightforward pitch? It’s not that we necessarily disagree with him, but the finest writing, art, needs more.

In sum, The Gist of Life is a diverting, entertaining collection that will pique the interest of casual readers. Those who appreciate the nuances of fine poetry, however, may find themselves yearning for verse that delves a little deeper.