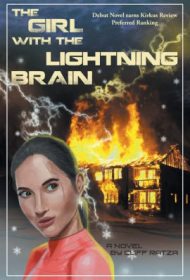 Set in the near-future and revolving around a young woman with extraordinary abilities, Cliff Ratza’s novel—and first of a projected series—is a cerebral fusion of science fiction, dystopian fiction, and mainstream thriller.

After her mother is killed while giving birth when a bolt of lightning strikes a house, Electra Kittner is raised by her father Jason, a scientist with the National Institute of Health, and her grandfather Doc, a semi-retired physician. As Electra grows, Jason—with two coworkers—comes closer to finding a vaccine to eradicate the Techno-Plague, a disease raging globally. The sickness causes cognitive impairment similar to Alzheimer’s and has ushered in a dark era some call the Great Dimming. People are getting collectively dumber while governments become more autocratic.

But amidst all of this, Electra is a shining star, a possible savior for the human race. The lightning has inexplicably made her a “genetic freak” not only immune to the plague, but also exponentially smarter and stronger than others. That intelligence makes her a target, and as she grows older and follows her father in trying to find a cure for the plague, she becomes entangled in a terrorist plot to weaponize the sickness as well as a grand-scale government conspiracy.

The novel’s latter part is high energy and action-packed. Throughout, Electra’s character is pure gold. She’s fully realized, and readers will feel like they understand her intimately. Additionally, her superior intellect and body make for a rich storyline to mine.

Unfortunately, there’s a lot crowded into this narrative—some of it interesting (Electra’s mother’s poetry, discussions about religion and philosophy, etc.) and some of it unnecessary (i.e., a five-page play-by-play of a soccer game). This creates an unwieldy read with erratic pacing throughout.

Electra’s narrative potential lends much promise to future installments, provided the author can eliminate tangents that dull narrative momentum and overall intensity. In this debut of the series, readers will find satisfactions and frustrations alike.