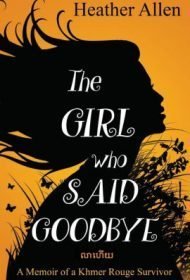 Heather Allen brings to life the voice of a young, determined, and remarkable Cambodian girl—the author’s aunt— in this gripping true story of horror and survival under the brutal Khmer Rouge regime (1975-1979).

In a violent military coup, Siv Eng, daughter of middle-class, prosperous, educated parents, and her siblings are abruptly swept up in the communist takeover, interrupting her university career. Forced to evacuate Phnom Penh in a march to remote jungle village labor camps, the siblings have no idea of the whereabouts of the rest of the family.

Through vignettes, flashbacks, and simple description, as told through Siv Eng’s eyes, Allen creates a vivid portrait of a sophisticated culture plunged into a world of abuse and genocide—while bringing to light the flawed philosophy of the Khmer Rouge’s agrarian utopia.

Mass executions along with years of forced labor, starvation, and disease spark Siv Eng’s formidable resolve to survive and reunite with her family. She learns to steal and barter for grains of rice and favors from village leaders through hat-making or sewing.

Fleeing to a village where she believes she will find her sister, who was sent away after stealing mung beans, Siv Eng is caught and imprisoned. There, she witnesses multiple horrors, including suffocation punishments for stealing infractions: “…the Khmer Rouge placed a plastic bag over the victim’s head and kept it there until the person was asphyxiated. Before death, the bag was briefly removed, and the process was started over again.” Of her captors, she remarks: “Instead of planting seeds in the ground to feed the masses, the Khmer Rouge planted corpses.”

In the harrowing aftermath, Siv Eng is eventually swallowed up in a river of Cambodian refugees desperately seeking to be reunited with their lost families.

Here is a story that must be told. With uncomplicated prose in which little is sugarcoated, Allen delivers an exceptional, arresting work. Students of holocaust studies, Asian history, and Marxism will find it an invaluable account.

BlueInk Heads-Up: This book is equally as suited for middle school and high school readers as it is for book clubs or as part of a college curriculum.