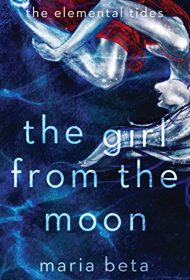 Author Maria Beta’s The Girl from the Moon is a science fiction novel combining elements of dystopia with an aesthetic reminiscent of a Victorian romance.

Set in the near future, the story features Cate and her older sister Victoria, the purported daughters of humanity’s premiere scientist, famous for repairing the ozone layer and rescuing Earth. Like others of their privileged class, they have travelled to Earth from the lunar colony of their childhoods to pursue opportunities academic and social (Cate is headed to college while Victoria is engaged to a popular young senator).

Then a freak accident threatens everything, as first Cate, and then Victoria, are exposed as possessing superhuman powers of alien origin, which upends everything they know of their heritage and world. Forced to seek their true origins against a treacherous political backdrop, they discover relationships they never thought possible with beings they could never have dreamed of.

Beta’s greatest strength is in her world-building. She provides a plausible future shaped by climate change, but instead of dwelling primarily on the bleakness, she depicts a culture we can recognize, steeped in social class, political stardom, and celebrity obsessions. It’s also unusual that, like an Austen novel, the protagonists are young women with status who are as concerned with finding a suitor as they are with the extraterrestrial origins of their growing crisis.

The vast majority of the novel is written in dialogue, much of it concerning the men and boys in the sisters’ orbits. Unfortunately, their conversations feel stiff and tend to kill the pace and tension Beta might otherwise achieve. Add to that a tendency to cut away during any moment of genuine action (only to revisit it later in a new conversation), and little of the novel’s potential for excitement is ever realized.

The Girl from the Moon has a well-drawn world and carefully thought-out premises, but it is too weighted with unnecessary, tension-draining dialogue to fully deliver on its promise.