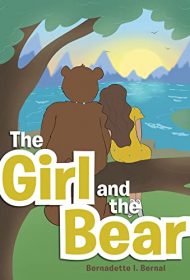 A girl and bear who were best friends as youngsters have an emotional reunion as adults in this gentle children’s picture book.

The story introduces a girl and bear cub (called “Girl” and “Bear”) who enjoy playing, telling stories, sitting in a big oak tree, and visiting the ocean. They promise to be best friends forever, but as they age, Girl decides to part because of the changes looming as they both grow. It’s a painful separation for both.

Years later, Girl revisits the area where she played with Bear and finds a friendship necklace they made together. She then runs into a full-grown bear who recognizes the necklace, and in turn, the girl. Bear has longed for her return, and Girl realizes how much she’s missed Bear. The book ends with the two sitting in their tree, watching the sun set, promising to never separate again.

This is a touching story. Although told in a simple, kid-friendly way, it’s open to interesting interpretations that could encompass puberty, aspects of diversity, and societal approval. The decision to leave the girl and bear unnamed lends the book universal appeal.

The writing is often graceful, as when Bear is described as “her best friend that she loves from the moon to the shores and back,” and the full-color art adds to the book’s beauty. For example, one page shows Bear growing and indicates seasons passing with subtle elements: vines growing, leaves falling, snow around a tree.

Unfortunately, the writing can be repetitious: At one point, Girl “turns around in fear” then “stands there in fear” until she finally speaks “in fear.” On the same page, the author writes: “Looking at her with disbelief in his eyes, [Bear] can’t believe that Girl has come back. Girl stands there with disbelief in her eyes.” Tense agreement and typos are also distracting.

Despite such technical flaws, the book’s tremendous heart shines through. Readers should enjoy this sweet, memorable story.