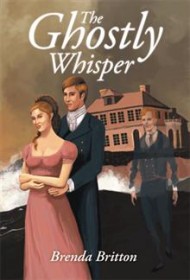 The Ghostly Whisper bolts from the gate with murder, a suspicious spectral presence and a hint of dark deeds.

Set in 1816 England, 18-year-old Laura’s family is mysteriously slain. A letter left by her beloved brother hints that he and their father were investigating illegal smuggling occurring on the estate and directs her to marry family friend Adam for safety. In doing so, Laura finds both a companion for hunting the killer and a fulfilling lover. Each in turn escape death at the hands of an enigmatic killer as their investigation reveals connections between the smuggler and long-ago, entwining family deceptions.

This is no traditional romance. Instead of the hero/heroin relationship overcoming obstacles and building to love and consummation, the author has Laura and Adam focus on the mystery. She also substitutes a quick marriage rife with sexual encounters for a developing romance. The sex scenes are frequent, fun to read, well written and explicit, but overt sexual banter in 1816 high society formal parlors feels wrong: “The Dowager laughed…’I know how it is done and have done it in many ways.'”

Author Brenda Britton’s writing has both pros and cons. Some scenes are skillful while others are crammed with information instead of story. The plot develops logically but frequent retelling of events slows the pace. The villains are deliciously evil, but the reader would benefit from seeing the dastardly Bartie suffer at the hands of his father rather than learning of it by the footman’s colorless retelling. The denouement is satisfying but diluted by an additional 40 pages and new characters tacked on apparently leading to the next book.

In the end, little is made of the actual “ghostly whisper,” which appears placed in the book to accommodate the title, just as sex was added to accommodate the romance classification. In sum, this is a good mystery with plenty of sexual spice but often flattens into a rote telling of events.