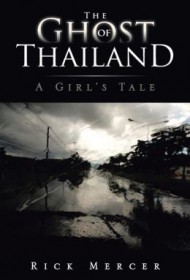 A young girl’s experiences with personal rejection, near death, angry spirits and the supernatural fill this pleasantly descriptive book about Nongnooch Mercer, aka Moo. The book is written in the first person of Moo, though actually penned by her husband, who faithfully recorded the details of his wife’s life.

Moo was born in 1964 to a single mother who had no interest in raising her. She was taken in by her grandma and her aunt, growing up in extreme poverty in a tiny village in far northeast Thailand. After nearly dying at age six, Moo believes she acquired psychic abilities, allowing her to predict future events and connect with spirits. She also struggled with personal fears and witnessed the public suicide of a broken man.

Mercer writes in the conversational tone of one chatting with a friend. His prose employs the strong sights, sounds and scents Moo recalls from those years. For example, her bedroom “smelt of wet wood and mildew” and the family’s usual meager dinner consisted of “sticky rice with ground up sardine-sized fish.”

Sometimes, the phrasing is unexpectedly humorous, such as when Moo describes her body’s flaws with self-deprecation: “In my opinion, I had the ugliest legs in Asia; they were short and chubby like me. Even today, I think my legs are butt-ugly.”

Unfortunately, the writing here is flawed by jolting word misuse and misspellings, such as in the mention of fictional lawyer Parry (not Perry) Mason, “isles” for “aisles,” and “yoke” instead of “yolk.” Trite phrases trail through the text as well. And because it wraps up in her 17th year, the reader is left to wonder how her life changed in later years.

Mercer’s book feels critically honest in its depictions of Moo, her spooky childhood, kin and acquaintances, and it is enhanced by black-and-white photos. Due to the mentioned flaws, however, family and friends would be the book’s most likely audience.