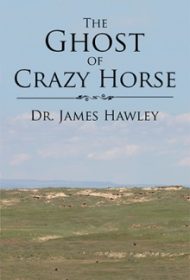 Set in Wyoming under the shadow of the Black Hills, The Ghost of Crazy Horse focuses on the Wegners, a ranching family.

The family includes two parents, two sons, and two daughters. Patriarch Bruce is fascinated with myths of Crazy Horse, a murdered Indian chief whose bones were buried between the Wegners’ ranch and the Black Hills in 1878. Bruce enthralls his young sons Eric and Waldo with the legend, pointing out distant, dancing lights as proof of Crazy Horse’s ghostly presence.

After a prologue about the chief, the family drama unfolds in short, chronological jumps, tracking the sons from adolescence to high school, the Vietnam War, marriage, births and deaths. Later comes Waldo’s sudden onset of Alzheimer’s, his fixation on Crazy Horse cycling back to his father’s.

While the conceit carries promise, the writing, unfortunately, presents challenges. Dialogue is repetitive and static. Instead of focusing on plot points, the author recounts unnecessary detail, e.g., someone walking to the left side of the truck while another walks to the right. The narrative includes countless recitations of breakfast preparation. By contrast, when the family gathers and characters might relate to one another, they’re mute. Even when the boys are home on leave or the family reunites at Christmas, there’s no communication.

Implausibility abounds: It’s not until graduation day that the parents ask their sons about college plans. When Waldo and wife Aimee visit his parents, Waldo’s mom is surprised that Aimee’s pregnant, although they live just half a mile apart—and Aimee gives birth that night. Hair and/or eye colors change; venison morphs into roast beef; Waldo’s country-boy accent fluctuates.

There’s one highlight: When the story juxtaposes scenes of Eric under heavy fire in Vietnam with Waldo’s fairytale wedding, it creates tension and vividly contrasts the highs and lows of family life.

If the writer had expanded on this kind of drama, the novel would be much improved. As is, it’s likely to find limited appeal.