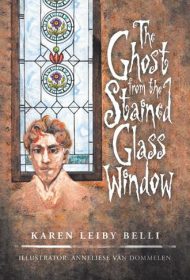 Twelve-year-old Dani finds an old stained-glass window at an auction, and convinces her parents to buy it. Outbid, Dani persuades the window’s buyer to sell it to her. Later that day, Dani’s mother is killed in a car accident. Although Dani sets the window aside for a time, she continues to be drawn to it.

After cleaning the window and discovering a Ouija board, Dani has odd experiences. She starts seeing a spectral bulldog, and then a creepy, old-man ghost. Both the Ouija board and the window seemingly move from where they were placed. A cake pedestal is mysteriously broken in the middle of the night, and Dani even gets a bump on her head after a ghostly encounter.

Meanwhile, her father takes a job renovating an elderly woman’s mansion, and shortly thereafter, the woman invites them to live with her. Soon, Dani is drawn to solve the mystery of what happened to the mansion’s original owners—a mystery involving the stained-glass window, mental illness, demons and a past that won’t rest until the truth is revealed.

Middle-school readers will be entertained by this eerie tale and likely charmed by Annalies Van Dommelen’s realistic pen and ink illustrations. While Belli weaves a compelling, believable yet fantastical plot, however, some technical issues distract. At times, the writing tells instead of shows, and sometimes events aren’t clear. For example, one night Dani is awakened by a spooky laugh and a crash of glass. When she runs into the living room with her dad, Belli writes: “Her dad turned on the light and picked up the still-moving gargoyle.” What gargoyle? It’s never explained. Also, at times, Belli uses too many synonyms for the word “said.”

Despite such shortcomings, readers will want to know what happens. Fans of the Goosebumps series and other scary stories will likely appreciate this gothic tale.