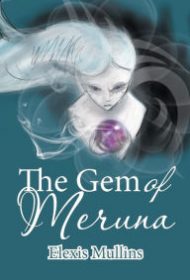 The Gem of Meruna, by Elexis Mullins, is a romantic fantasy with a coming–of age theme.

Two generations ago, Jezebella, a member of the peaceful Leey race on the planet Gordeky, suffered unimaginable tragedy; now she rules over the land as a tyrant, with violent creatures called Chalkies terrifying the populace.

Despite growing up in such dark times, young Kiluna finds hope in stories of the world that once was. When Sonoma, her grandmother, dies at the hands of Chalkies, Kiluna discovers in Sonoma’s diaries a peaceful world that could be restored if only someone can retrieve the titular Gem of Meruna. She embarks on a quest into foreboding forests and ultimately another planet. Along the way, she encounters Joseya, a young man with whom she shares an instant connection, and together they fight to restore peace to Gordeky.

Kiluna is a compelling character, and using Sonoma’s journal for the story’s framework adds depth to the author’s imagined world and immediacy to Kiluna’s quest. The details are at times underdeveloped (e.g. how, exactly, will the gem restore peace to Gordeky?), but the archetypal structure of the characters and plot lend a comforting familiarity for fantasy fans.

Overall, the story’s style and themes—Kiluna’s longing, her budding first love, and being thrust into adult responsibilities—are reminiscent of young adult fiction. But the novel contains more mature sexual content. Indeed, the most compelling part of Kiluna’s journey is her budding relationship with Joseya.

Toward the end, events seem to move too quickly, resolve too tidily, and leave open questions and absent details. The mechanism to travel to other planets isn’t fully explained, and the violence necessary to accomplish Kiluna’s mission seems at odds with Leey culture.

Nonetheless, these are far from fatal flaws in a novel that engages readers’ childlike sense of adventure and presents genuinely likeable characters worth rooting for.