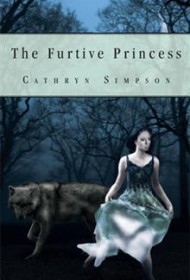 Set in high school, The Furtive Princess is a young adult fiction title for the werewolf-pack set, although ultimately, the short novel lacks the necessary bite to fully engage its audience.

Lilibeth has left England for the U.S. to live with an aunt and uncle; her parents died in “the incident” that forced her departure. Lili makes new friends and almost instantly falls for a werewolf like herself. Can her guardians keep these fanged teens apart?

Of course not! Before you can let out a howl, author Cathryn Simpson writes, “We didn’t go all the way, but we were both lying under the duvet with no clothes on.” Soon complex circumstances lead Lili back home, but she and her sharp-toothed swain will always have email and Skype.

The Furtive Princess has several issues that need addressing. Even though it’s a very short novel, Simpson repeats information from sentence to sentence as if she’s worried we’ve forgotten Lili is at school, or in the U.S., or is a werewolf. And the writing is often choppy: “I went on to my next class which was French and found the boy, that I had been introduced to yesterday was, sat next to the only free seat.” It’s possible to divine her intent but rarely easy, and that makes for slow going.

Additionally, this fantasy never feels fantastic: The characters don’t grow and evolve, and there’s nothing to invest in emotionally. Finally, although Simpson makes it clear that Lili’s parents were killed in an attack on a werewolf pack, she continues to refer to “the incident” as if it’s a secret yet to be revealed.

Simpson has the rudiments of a paranormal romance in place, but to compel readers, The Furtive Princess requires a thorough revision: editing for clarity and re-imagining to create a plot that allows its characters to develop.