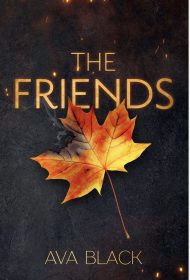 Ava Black’s engrossing novel, The Friends, is a psychological thriller revolving around a fateful high school party years ago.

The novel centers on three would-be friends, or rather frenemies. In their high school past, Marlene was the unpopular girl who was only welcome at a certain homecoming party if she brought the illegal booze. Known as “Marlene the Trailer Trash Queen,” she was invited by her popular and mean cousin, Valarie. With her friend, Hope, she stole the whiskey—but that was the least of the wrongs committed that night.

In the present, Marlene is a successful author whose marriage is falling apart in Chicago. She travels to her small-town home in Wisconsin to help Valarie, who is in the mid-stage of ALS but still as mean as ever. Once home, Marlene encounters Hope, who is now a meth addict, thief and prostitute. Readers soon learn that all three partly know the facts behind a tragedy that happened at the homecoming party, but none know what the others know.

Black’s deft storytelling sucks readers into this complicated and absorbing tale of lovers, betrayals, blackmail and murder. Mostly, though, it’s a story of friendship and connection—or the lack of both.

The story shifts ably among the three women’s viewpoints. As the author develops each character, they grow from unlikable and unsympathetic to utterly compelling.

Ultimately, however, it’s the story’s unexpected turns and the author’s crisp writing style that keep readers flying through the book. Told in present tense in mostly spare sentences, the narrative conveys a sense of urgency without sacrificing style. For example, when one character considers the “questionable things” she has done, Black writes: “She doesn’t feel bad, she feels like a worm that burrowed into her brain, and caused it to swell, has crawled out and released the pressure.”

Fans of Denise Mina and other psychological thrillers such as Gone Girl will relish the twists and turns of this page-turner.