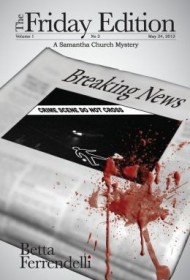 Tragedy and pain color this contemporary whodunit set in a Denver suburb where the alleged suicide of a young assistant district attorney leads to an investigation that will have shocking results.

The victim, Robin Marino, is the sister of Samantha (“Sam”) Church, a reporter who fell from grace at the Denver Post and who now works for a community weekly. Together they survived severe childhood abuse and trauma, Sam moreso. Both are alcoholics, though Robin achieved sobriety a long time ago. Not so for Sam, who has lost her marriage, a job, her faith, and custody of her young daughter. She has visible emotional scars and deep, fresh wounds. Following Robin’s death, Sam struggles slowly and painfully to solve the mystery of why her beloved sister died.

The author is exceedingly skillful in portraying the gray life of a functional alcoholic, the heavy weight of depression, and unbearable loneliness. If it was the author’s design to create a sustained feeling of a grim life gradually emerging into light, then she has succeeded.

Unfortunately, by taking that approach, readers learn little about the other characters. In fact, new characters are introduced right up to the last few pages of the book with no previous allusion to them. Again, if this was the author’s way of portraying Sam’s journey to healing, then she’s done it well, but when the new characters appear, adding a surprise dimension to the plot, some readers may feel the author has kept too much from them.

The writing is uneven, with graceful, poignant prose dominating, but with instances of distracting errors that range from dropped letters to sentences such as: “ A sense of fear overwhelmed her and take [sic] her breath away.” The book would benefit from careful proofreading.

Its plotting and pacing, however, are solid, and mystery lovers will likely want to know more about Sam Church despite this novel’s flaws.