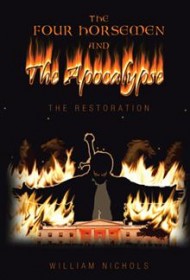 This ambitious — and potentially divisive — debut novel from William Nichols can be perceived as either an allegorical telling of one man’s heroic crusade to “purge the wickedness from the nation” and create a new world order or a thinly veiled manifesto by a Christian jihadist who is contemplating the ultimate act of domestic terrorism.

Essentially religious commentary cloaked in an adeptly written apocalyptic thriller, the story revolves around Jackson Mathias More, a young man who has found salvation through God and now believes that those that “pugnaciously invite secular humanism into every social circle” and increase the idea of a Godless world need to “answer for their blasphemy.” A reoccurring — and life-changing — dream inspires Mathias to do the unthinkable: to mastermind a plan that, if successful, could change the very course of history.

As “the Apocalypse,” Mathias secretly creates an army (the Warriors of Apocalypse) of true believers led by four of his closest friends (the Four Horsemen) and unleashes a grand-scale plot that includes shutting down and taking over Washington, D.C., imprisoning the President and most of Congress, infiltrating NORAD, and ultimately recreating an entire nation.

While the storyline certainly is well constructed, there are a number of troublesome aspects to the narrative, particularly the offensive gender and racial stereotyping. There is a conspicuous lack of female warriors, and the lone female character is a dainty, two-dimensional love interest whose only contribution is to sew a flag! And why is it that only the black character talks in slang (“Likewise, playah” ) and listens to Tupac ?

But most disconcerting is the unendearing character of Mathias, whose actions throughout seemingly go against core Christian doctrine (turning the other cheek, rejecting materialism, humility, forgiveness, etc.)