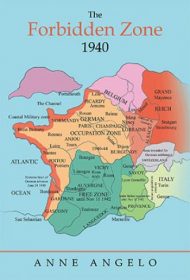 Anne Angelo recounts her time as a young ex-patriate Scot living in occupied France during World War II in The Forbidden Zone 1940.

The memoir continues the story Angelo began with A Sprig of White Heather and a Scottish Lass, which covers her years growing up with economic hardship and family turmoil in rural Scotland prior to moving to the northern French city of Lille, where she first worked as a governess. The early chapters aptly summarize Angelo’s past for new readers.

Now in her 20s, Angelo operates a small hotel in Lille. After briefly visiting her family in Scotland in late August 1939, she returns and finds the hotel deserted. After France declares war on Germany in September, she writes that “The life I’d known was gone.” She then uses the hotel to house Allied military members and briefly volunteers as an ambulance driver. Amidst encroaching danger, she meets Gerald, a middle-aged married British officer. They fall in love during their short time together before he must leave.

Once the Nazis occupy Lille, Angelo remains at the hotel after unsuccessfully attempting to escape France. She works with the French Resistance, engaging in increasingly perilous activities while harboring downed British pilots. Under the Gestapo’s scrutiny, she again tries to flee while not knowing whether she will ever reunite with Gerald.

Although Angelo frames the narrative with references to Gerald and describes her waiting on word of him as “a soul-destroying purgatory,” her account is more war memoir than love story. She describes her exploits, some in greater detail than others, with a matter-of-factness that underscores her courage and resourcefulness. While her writing is sometimes a bit choppy and the story wraps up too quickly, her survival tale makes for compelling reading. (Note: readers should skip the prefatory note in which Angelo divulges the outcome.)

Ultimately, this is an engrossing memoir of a brave woman navigating a perilous time in history.