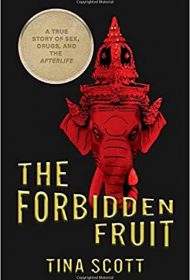 In this no-holds-barred memoir, Tina Scott recounts tales from her adventurous life.

Scott begins her story with emails she sent to friends, relating her husband’s fight with cancer. After his passing, she shifts to a first-person narrative to tell her life story. “It’s a true story,” she writes, “a tale of drug abuse, sex, a broken marriage, childbirth, travel, and fond memories of what I refer to as my ‘crazy days’.”

Those days began early. At 16, she ran away from home with her boyfriend, on their short-lived quest to become hippies. As a ‘70s college student, set free from the supervision of a strict great-aunt, she partied, did all-nighters taking drugs, and skipped class. Here, she met her first husband, who knocked on her door selling marijuana. What started as his dabbling in drug-dealing became closer to a full-time occupation. While this provided a nice lifestyle for her and their three children, he eventually ended up holed up in a basement bathroom, smoking crack. They divorced.

Her second husband was divorced with three children. Together, they formed their own brand of The Brady Bunch, raising a blended family of six children until her husband’s death.

Scott has worked, variously, as a waitress, office manager, volunteer firefighter, EMT, and fitness center owner. She’s taken “downers, uppers, and magic mushrooms,” lived a swinger’s lifestyle, seen Bigfoot while doing a psychic reading for a friend, moved to Nepal to teach English to Buddhist monks. Readers will appreciate her openness in recounting these and other adventures.

However, her stream-of-consciousness narrative style is problematic. The author careens from one topic to another, jumping back and forth in time and jumbling the chronology of her life. Spelling errors (“heroin” for “heroine”’ “menthe” for “menthol”; “pinnacle” for “pinochle,” etc.) also detract from the narrative.

That said, Scott’s zest for life comes through, loud and clear. Readers will find themselves hoping the next step in her long, strange journey brings her happiness.