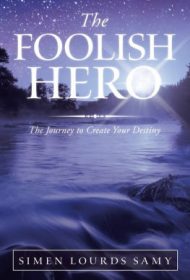 Simen Lourds Samy’s novel The Foolish Hero centers on Saman, a young Malaysian man who is in search of the road to success.

As the story begins, Saman is a boy attending school where he learns an early lesson about the reality of poverty. He hasn’t paid the 25 cents for an exercise workbook, and if he doesn’t come up with the book by the next day, he’ll be kicked out of class. Saman recalls the days when his father was a wealthy man and life was easier. Bad investments have since depleted their wealth, but the lessons learned from his father stay with Saman and guide him as an adult.

Saman marries, raises a family and begins a career. Soon, however, he is caught up in “trying to keep up with the Joneses,” driving a Mercedes Benz and buying a condominium. “Yet Saman realized that there was a constant void in his life. The wistfulness remained.”

Seeking to fill the void and change the luck he is said to have been cursed with at birth, Saman explores the teachings of great minds like Einstein. He creates lists of tasks and strategies that will help him persevere in his quest for success. And he soon gains insight about happiness—success in itself.

Although the story is solidly written line by line, it suffers from several flaws. It can be hard to follow, with shifts in time and storylines that are incomplete. The opening scene of the missing class book reaches no resolution, and frequently, as Saman continues his quest, there’s no sense of where his family is or if they even remain a part of his life. Likewise, the author raises questions regarding infidelities, but there are no repercussions or even reactions to the possibility.

The Foolish Hero would be greatly enhanced with more fully rendered and connected plot points, although the tale may intrigue readers with goals similar to the protagonist.