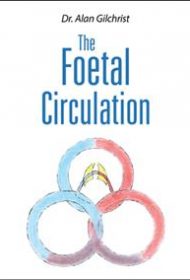 In Dr. Alan Gilchrist’s The Foetal Circulation, anecdotes from 58 years practicing medicine in Africa are coupled with an in-depth explanation of the fetal heart.

Focusing on aspects of perinatal cardiology, the author discusses topics ranging from fetal heart sounds, valves and blood circulation to the heart’s connection with thoracic organs (lungs). He also describes decades of changes in medicine and politics in one-time British colonies in southern Africa.

Gilchrist’s curiosity about the fetal heart was first piqued in 1965 when he examined the heart of a newborn who had never breathed—in essence, still a fetus. “I had seen something…never seen or described before, which revealed the true condition of the foetal heart.”   And as he began to research, the author came to believe that standard medical texts about the fetal heart were inaccurate: “Most of it is wrong—complete fantasy.”

The author presents detailed descriptions of circulatory changes pre-and post-birth and points out why many of his findings differ from currently accepted medical knowledge. For example, he suggests descriptions of the foramen ovale originated from those who may have never examined a fetal heart, as he has.

Such information is presented with clarity and directed at medical providers. Unfortunately, the author’s personal narratives sometimes divert into detail that isn’t directly relevant to the topic and will interest family and friends more than medical professionals (e.g., “We lived in the comfort of a hotel until my bank balance went into the red”). Nonetheless, those with a deep interest in fetal circulation can easily skip over such personal passages.

The book has not been peer reviewed, or even commented upon, by medical authorities, which makes it less likely to be taken seriously as a reference. Still, it’s possible that those who specialize in pediatric cardiology may glean information here that advances their current understanding of the fetal heart.