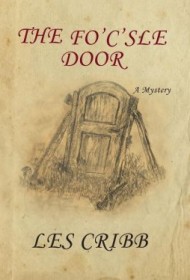 The cliché about not judging a book by its cover holds true with The Fo’c’sle Door. With its uninviting title, and simple pencil drawing on the cover, it doesn’t exactly scream “bestseller” — and yet readers will find a gripping epic adventure within its pages.

The story begins when Canadian police are called to a scene where two men have died and witnesses are acting strangely. The story then flashes back two months earlier to the characters who end up at the bizarre scene. One is headed to England for a wedding at a tiny fishing village, Ryeport.

It’s a confusing start, but soon author Les Cribbs gets to the heart of the story, when the town’s present day vicar begins reading from the journal of the vicar who built Ryeport’s famous church centuries ago. From here, the story becomes all-consuming.

The tale focuses on dandy Rodney McDowd, whose father disinherits him and sends him into the priesthood to improve himself. McDowd ends up in Ryeport and acts the part of the town’s spiritual leader to please his father. But over time, he begins to care for the townsfolk and conceives of a church that doubles as a lighthouse in order to help local fishermen navigate Ryeport’s dangerous shores. He also becomes part of a smuggling ring — initially to help protect his parishioners who are involved. The town’s criminal undertow leads to a run-in with a violent sea captain and later a mysterious Haitian who seeks revenge from the captain for his daughter’s death — even if it takes generations and a supernatural twist to accomplish.

While a copyeditor could have eliminated the many errant commas and apostrophes, Cribb’s characters are likable, his dialogue convincing and his knowledge of English history and ships impressive, adding to the main story’s realism. He deftly progresses the narrative until the end, when the book returns to the present. The paranormal denouement works (although some may feel the story of McDowd and Ryeport’s past is more entertaining than the ending’s artificiality). Overall, this is an entertaining, satisfying novel delivered by a talented storyteller.