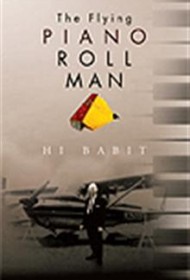 Musician, composer, pilot, inventor, photographer, motorcyclist. These are just some of the activities of author Hi Babit in his long and busy life. In this memoir, Babit (born in 1917) appears as a mid-century renaissance man in perpetual motion.

The first four chapters discuss Babit’s childhood in New York, his years as a teenage pianist, his service in WWII, and his post-war years. His final three chapters highlight respectively his work creating player piano rolls, as a pilot, and as an inventor. Almost one-third of the book contains photos, as well as sheet music for some of his compositions.

The author displays boundless curiosity and energy. He learns new skills voraciously. He starts businesses and drops them, files patents, writes articles while developing photos, all at the speed of a Cessna.

Like many of the so-called Greatest Generation, Babit is pre-psychological. His memoir is not about his inner life but about his activities. There’s almost nothing here about his relationships with his two wives (he loses both to cancer, a matter he glosses over in a sentence or two), little mention of his children, and precious little about how he feels about anything. Depending on personal preference, this approach is either refreshing or unrevealing.

Babit’s memoir is conversational, like a postcard written to a close friend. Occasionally marred by spelling errors (particularly distracting is his consistent misspelling of the word “Israel”), it also suffers from a confused structure. In his first several chapters, Babit frequently jumps from one decade to another, depending on what he happens to be discussing. This leaping through the decades confuses the distinction he has chosen to make between chronological chapters and chapters covering specific subjects.

Nonetheless, his joie de vivre is infectious. Babit appears in print as the jovial New York Jewish grandfather you had or might like to have had.